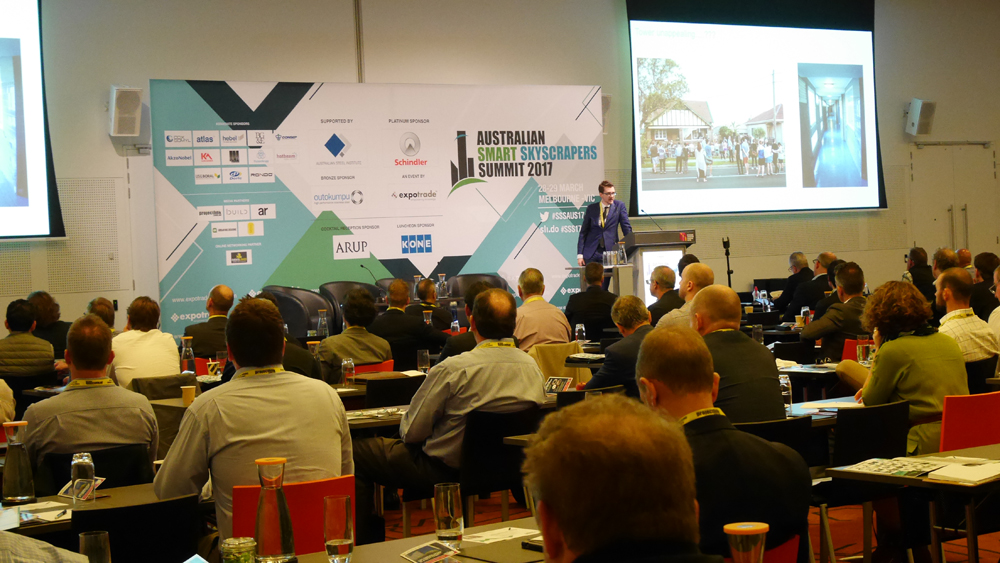 On March 28th-29th high-rise experts and delegates ranging from architects, designers, urban planners, structural engineers, suppliers and developers gathered at the Melbourne Exhibition and Convention Centre to spotlight new trends in high-rise construction and design at the premiere event of the Australian Smart Skyscrapers Summit 2017.

The Summit commenced with an address from Platinum Sponsor Schindler noting the remarkable and profitable nature of the Australian tall building market which is already home to 325 towers that are 100 metres or taller with almost the same number proposed or under construction.

The Summit proved a platform for conceptualising new ways of designing and building high-rise towers. For Dr Philip Oldfield, Senior Lecturer in the Faculty of the Built Environment, University of New South Wales, Sydney, creating vertical communities and incorporating generous public amenities at the ground floor level are two essential aspects of tall building design that could be enhanced in future skyscraper typologies.

An inspiring event with an international assembly of experts at the cutting-edge of projects, the Summit brought together speakers offering new insight into the industry, as high-rises change dramatically. One such example is Zaha Hadid Architects’ Michele Pasca di Magliano, Project Director of 600 Collins Street. Magliano’s work looks at bringing in new design ideas that could revolutionise the market. Innovative design principles such as internal atriums and internal communication between floors as well as new structural systems such as exoskeletons and external façade systems are at the forefront of the firm’s latest designs.

Ground-breaking elevator innovations such as Thyssenkrupp’s MULTI, ushers in a new age of vertical transportation for high-rises, with horizontal movement offering greater architectural flexibility. High-rise vertical transport will incorporate smart technology to predict and analyse traffic flow. Representatives from ThyssenKrupp revealed that this technology could be made available in the Australian market within a few months.

According to Claude Godfrey, Partner and Design Director of the Hong Kong branch of Henning Larsen Architects, the Australian skyscraper industry is still in its infancy. However, Australia has a unique personality and a great potential for more particularity in building and design. While learning from major cities with high density urban grids, Australia should aim to construct skyscrapers based around its own identity rather than reproduce typical faceless glass façades, says Godfrey. Skyscrapers in Australia should strive to forge their own relationship with the city and its people. A consensus was reached that what takes place between the skyscrapers on the ground floor is almost more important that the buildings themselves. Multiple speakers emphasised this human scale and demonstrated a dedication to the wellbeing of citizens in designing and constructing skyscrapers.

Director of Supertall Buildings at Adrian Smith and Gordon Gill Architects from Chicago, Peter Weismantle, spoke of the multiple systems which interact with each other in order to produce functional tall buildings. Smart skyscrapers encompass smart infrastructure, both the fabric and physicality of a building, including practical elements such as elevators, exterior walls and fire safety. Weismantle also highlighted the importance of the ground plane and the challenge of designing high-rise buildings that are able to facilitate human connections rather than alienate and dehumanise.

Social interaction and features of the urban habitat emerged as the strongest upcoming trends in polling conducted among Summit delegates. Alistair Guthrie, Director of Arup, pointed to new trends to watch in high-rise construction, namely skyscrapers with more social spaces, the advent of the green, vegetated skyscraper and timber construction.

The Summit was an invaluable knowledge sharing event and platform for collaborative opportunities between industry professionals working towards the better design of tall towers across the board in the Australian context. The event brought into sharp focus that creating inhabitable, liveable and humanised high-rises which interact with the local environment will be a leading focus for future projects.