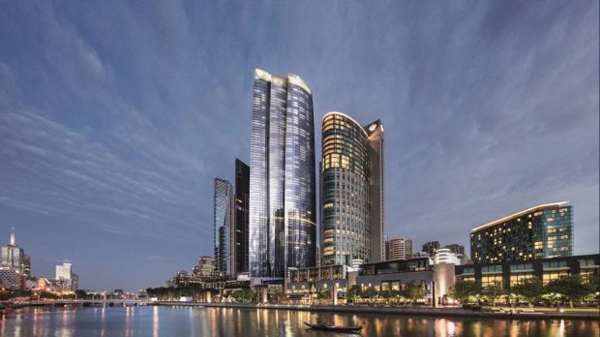 Casino giant Crown will expand its Southbank site to eight hectares after it won approval from the Andrews government to build a $1.75 billion 90-storey tower.

Once completed, it will be Melbourne's tallest building, at 322 metres.

The 1 Queensbridge Street site will be home to a 6-star hotel with 388 rooms and 708 apartments.

Premier Daniel Andrews said the project was of "state significance" because it would create 4000 jobs; 3000 during construction and another 4000 once up and running.

"It's not just about height though, the quality of this design outcome, particularly the public realm benefits that will be accessible for all Victorians, really mark this out as a very, very special project," Mr Andrews said.

Planning Minister Richard Wynne gave approval to the project - which is claimed to represent $2.1 billion in economic benefit - after 12 months of talks with the developer and Melbourne City Council.

"This process has been careful, it has been considered," Mr Andrews said.

As part of the deal Crown and developer Schiavello group will pay $100 million towards a community package that will see a $25 million upgrade of Queensbridge square, and $15 million towards Sandridge rail bridge.

The Premier said the old rail bridge could be re-imagined to be similar to the famous High Line in New York City.

Construction on the 5060 square metre site is hoped to begin as soon as 2018 and will take up to six years to complete.

There will be no gaming at the new site, which will be connected to the casino complex by a footbridge over Queensbridge Street.

Mr Wynne said sky bridges across city roads were a feature of Melbourne.

Crown Resorts' Todd Nisbet said the casino's hotels currently operated at 90 per cent occupancy and the he believed the new hotel would be full given Victoria's long list of major events.