How high can we go? Melbourne's future skyscraper forecast 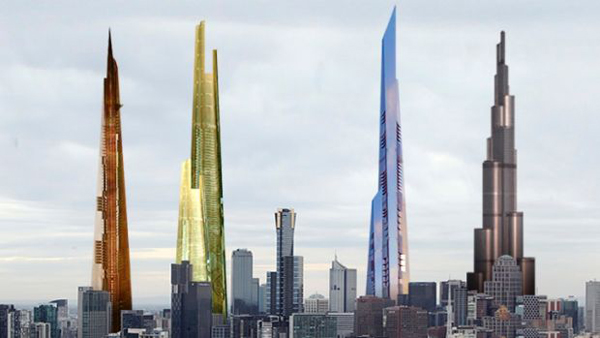 Some sixty years ago, when cities were still mostly flat, American architect Frank Lloyd Wright designed a skyscraper that would touch the clouds.

At more than one-mile high, or 1600 metres, the tower was to have boasted 76 lifts and 528 floors.  The building was never constructed, but decades later, that crazy dream is within grasp.

Humans now have the technical capability to build skyscrapers many kilometres high.

While experts disagree exactly what this will mean for Melbourne, Australian cities could eventually see mega buildings anywhere between 350 metres and a kilometre high.

The new skyscrapers will be greener, some will be made of wood and the taller buildings will be twisted in shape, to cope with strong winds at altitude.

Recently Melbourne has climbed its way into the world's top skyscraper cities, with more than 100 buildings over 100 metres – more than twice as many as London (which has 49) and Beijing (with 47).

But while Melbourne is quite a tall city by world standards, it lacks a true skyscraper icon.

Melbourne's Eureka Tower, at 297 metres, is only the 114th tallest tower in the world. And while work has already started on a new 317-metre skyscraper in Southbank, Australia 108, it will barely rate a mention compared to its mammoth global cousins.

The Burj Khalifa building in Dubai stands at 828 metres and the world's first kilometre-high building is under construction in Jeddah, Saudi Arabia, inching closer yet to Frank Lloyd Wright's mile-high skyscraper vision.

In the past, building heights had been restricted by heavy elevator rope prone to snapping at around 700 metres, said University of New South Wales tall building expert Dr Philip Oldfield.

"From a building physics point of view, we can build two to three kilometres tall," Dr Oldfield said.

"When I worked in Chicago I remember seeing a very, very real proposal for 2.5-kilometre tower in Dubai. It was being designed and then the market crashed."

Dr Oldfield said the catch was that any building over about 350 metres was "economically unviable", unless its owner was able to derive other benefits from its "icon" status, such as increasing the value of surrounding land or through publicity and tourism.

For example, when the 560-metre Grollo tower was proposed in Melbourne around 1999 to be the world's tallest building, it was part of a bid to develop a sprawling 11.5 hectare pocket of Docklands, including another 12 buildings.

Today, the expectations for Melbourne's future skyscrapers are low in comparison to cities in China or the Middle East, where soaring towers are motivated by a desire to portray power and economic advancement to the world.

BKK Architects director Simon Knott was unwilling to put a cap on the city's skyline but suspects that technology advances will keep pushing Australian towers higher.

"It will probably happen on the Gold Coast, someone in Australia will want to build a kilometre-high building," Mr Knott said.

"I would never underestimate a politician's and a corporation's willingness to assert themselves on the horizon.

"When you get those two things coming together it tends to wipe the planning regulations off the face of the map."

As Melbourne's skyscrapers inch higher, they are likely to become more twisted and tapered in shape, to improve their aerodynamics at heights where the wind is strong.

"The boxy tall buildings that are we seeing in the 200-metre range are hard to make work if you are getting up to 500 metres," said MEL Consultants' engineering expert Dr Leighton Cochran.

Skinny towers are also on the rise, as developers try to squeeze more onto smaller sites, while Melbourne is at the forefront of towers made of wood (at 10-storeys the Forte apartments in Docklands used to be the world's tallest timber building).

High-rise expert, Arup's Dr Craig Gibbons, said there were now 20-storey timber buildings on the drawing board, and the potential to go higher if used in conjunction with other materials.

"They have to be properly fire engineered," Dr Gibbons said. "The good thing about big thick, chunky timber is it doesn't burn through completely – in other words it does have the tendency to self extinguish to the point it is quite robust, albeit charred."

Dr Gibbons predicts the limit to global skyscraper height is around 1200 metres.