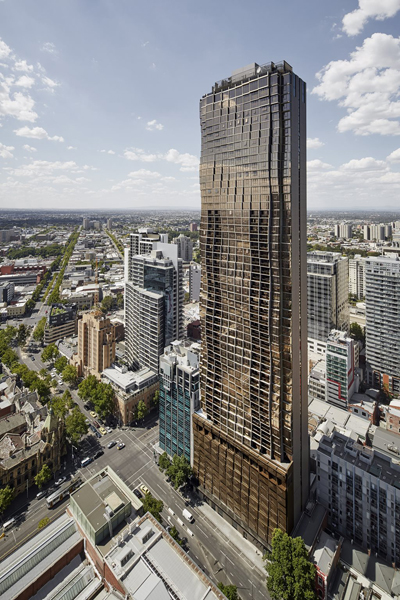 The apartment tower at 318 Russell Street came in fifth ahead of a number of mega structures from the US, Austria and the United Arab Emirates, and behind a couple of towers from China and one each from Russia and Italy.

Shanghai Tower designed by Gensler Architects and 2Define Architecture was the overall winner of the ESA, becoming the second Chinese project to win the honour in the program’s 16-year history.

Currently the second tallest building in the world and the tallest skyscraper in Asia, the Shanghai Tower impressed the jury with its elegant spiralling cylindrical shape, its energy efficiency, and its possession of the world’s fastest elevator.

Adobe318 was completed in 2015 and upon completion was the 11th-tallest building in Melbourne. It is famous for its rose-coloured rippling facade, made by the irregular placement of individual apartments to create a stacked effect.

Established in 2000, the Emporis Skyscraper Award sees a jury of architecture experts from all over the world acclaim buildings for their aesthetics and functional design. Previous winners include Wangjing SOHO, Beijing (2014), The Shard, London (2013) and Absolute World Towers, Mississauga (2012).