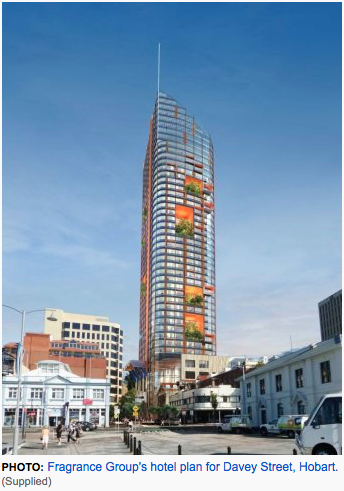 Singapore-based Fragrance Group has unveiled its plans, with a pledge Hobart's first skyscraper and another 20-storey futuristic structure would create 1,000 full-time jobs and ease the city's accommodation shortage.

At 120 metres, one hotel at 28-30 Davey Street will become the tallest building in Tasmania.

On the drawing board, the 35-storey five-star hotel features a bridge for pedestrians to walk to the waterfront without crossing Macquarie and Davey Streets.

It would also have a bridge to allow people to walk and cycle to the waterfront Macquarie Point site now under development.

"This allows the potential of attracting national and international conferences to the site, and therefore the 495 rooms of the hotel directly correlate to the site," he said.

Mr Haberle said having enough skilled labour in Hobart to work on the hotels would be the greatest challenge.

Fragrance currently has a 296-room hotel under construction in Macquarie Street, and the group said in a statement the three developments would bring its investment in Hobart to more than $250 million.

Fragrance is headed by Singapore billionaire Koh Wee Meng (also known as James Koh), whose wealth is more than $1 billion according to Forbes magazine.

"Funding is not a big problem for us."

The group plans to lodge development applications with the Hobart City Council within a week.

The announcement also came with an assurance his developments would take note of historic Sullivan's Cove and provide some interpretation. "[I'm] not really sure how it's going to look … not sure to be honest," Roshan Hanamseth said.

"It overshadows everything else. Very sad. I'm sure it'd be good for employment," Steve Waller said.

"It's too big for the surrounds. It'd go alright in Melbourne," Sharon Waller said.