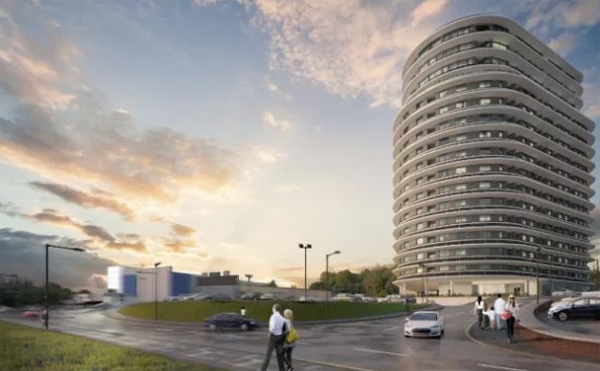 The high rise is going green. It seems hard to believe that a tall, hulking block made from huge amounts of material and consuming huge amounts of energy could ever be anything other than bad for our fragile environment. Yet conventional wisdom is being challenged by architects and scientists who are attempting to foster a new breed of “eco towers”.

Milan’s Bosco Verticale, designed by Stefano Boeri, translates as “vertical forest”. It is a celebrated residential tower which its designers have made to be literally green by covering it with plants. This “greening” of towers has become a recurring architectural trope in recent years, and sometimes it can signal style over substance – in the case of the Bosco Verticale’s many imitators.

The brand new Shanghai Tower, by the architects Gensler, claims to be one of the world’s greenest skyscrapers, as well as one of the tallest. Its green features include rooftop wind turbines, rainwater collection and re-use, dual-layered insulation, energy-saving devices, and combined heating and cooling – giving it a Leadership in Energy and Environmental Design (LEED) platinum rating.

Back in England, the team behind The Beacon in Hemel Hempstead are trying to go one better – and they reckon they’ve got the recipe for the greenest tall residential building ever seen in Britain. “It should generate as much energy as it needs for its consumption – so it essentially becomes self-sustaining,” explains Ambi Singh, commercial director at Lumiere Developments.

“It’s the elegant combination of renewable-energy generation with energy-conservation strategies that creates a building that has been modelled to use less than 80 per cent of the heat and electricity requirements of a normal residential tower.”

The building’s exterior will have the highest density “solar farm” in the UK. “Solar panels are elegantly incorporated into the external architecture of the building, creating a ‘solar ledge’ that wraps around each level of the building, on the outside of the balcony of each apartment,” says Singh, who has experience in the energy as well as architectural sector.

With power generated from those solar panels and by using the heat of the building, residents at The Beacon will get free electricity and hot water for five years. Add in LED lighting, triple glazing, natural ventilation systems and heat harvested from the ground, and you have a block that uses and loses much less heat and energy than is usual. “Think of peak load in the morning when everyone has a shower. Sixty per cent of that heat will be recovered from the shower system – that’s usually just all lost,” says Singh.

They’ve even thought of the noise problems that plague today’s densely packed apartment buildings. “Imagine someone’s playing Def Leppard too loud – we make sure the walls and floors are well insulated to take away that noise,” says Singh.

Recycling points are on each floor. And as for water? “Potable and non-potable water consumption is significantly reduced by use of a grey-water recovery system, which collects rainwater both at the 17th-floor communal roof terrace level as well as at each solar ledge level; the roof gardens will have a large-scale water attenuation tank – then water will be pushed through a filtration system to remove contaminants, so all this water can be reused for washing clothes or flushing toilets.”

Intriguingly, the 17-floor tower – designed by eco architects Wardman Brown of Leyburn, North Yorkshire – is popping up not in London but in the Hertfordshire commuter town of Hemel Hempstead. The area was planned as a new town in the Forties by the late Sir Geoffrey Jellicoe – who was himself a pioneer of architecture that mixed technology with supposedly green credentials.

In the Sixties, Jellicoe proposed a plan for an even grander new eco town near Staines, Middlesex, of connected tower blocks called Motopia, where cars would, incredibly, travel on the roofs of the buildings – all of which were to be set in generous parkland. This utopian idea, like something from a JG Ballard novel, was never realised.

Transport has also been a big part of The Beacon’s modus operandi – electric cars and electric bikes will be available to residents. The car park will be automated and your car parked by a robot. “We have this wonderful underground parking solution – it’s pretty cool, and it’s also in the Shard,” says Singh. “You don’t have so many emissions down there as it’s automated – and it takes up less space.”

Eco towers are spreading. A fad perhaps, but not necessarily a bad one. Stefano Boeri is due to build another Bosco Verticale, called La Tour des Cedres in the Swiss city of Lausanne. Like his Milanese project, this tower will be covered in coniferous trees, in order to trap dust, absorb CO2  and release oxygen.

“Bringing trees into the sky of a city means fighting the battle against the production of CO2  in the place where it is generated most. It’s like fighting the enemy in its own territory,” says Boeri. “With our projects we have proved that a tree could grow in the sky of a city in the same way it does on the ground.”

In Calcutta, the high-rise Astitva residential building has just opened – the first time the Indian Green Building Council has awarded a Green Homes Gold certificate to a building in India’s second-largest city. Existing towers can be retrofitted to be greener too – the 1967 tower block Austin House in Walsall, in the West Midlands, was transformed three years ago with insulation, solar panels and heat extracted from the ground – all reducing the amount of lost energy from the building.

But can a tower block ever really be eco-friendly? Or are we seeing some cheeky “greenwashing” on the part of developers?

“There are many reasons that high-rise living is green. We travel much shorter distances going vertically than horizontally, and lifts are probably the most energy efficient means of transportation on Earth except for a bicycle,” says Lloyd Alter, adjunct professor at Ryerson University in Toronto and design editor of the eco-architecture website Treehugger.com. “When you have a lot of people living together in tall buildings, then a bicycle is all you really need because there is enough of a population density to support stores, public transit and offices.”

But don’t go too high, he warns. “Buildings lose resilience, such as when the power goes out you lose water and fire protection because the pumps don’t work, and it’s too far to walk down and up the stairs. High density is green and good, but you can have too much of a good thing.”

What about the huge amount of energy expended to make the concrete, steel and glass for a building? Singh says the Beacon’s concrete will be produced as near as possible to the site and also that 35,000 tonnes of excavated chalk and clay will be used to infill non-load-bearing walls in the building. That’s rather than the usual practice of carting all that spoil away in hundreds of petrol-guzzling lorries.

“There’s a bigger agenda here,” he says. In the UK, air pollution kills 40,000 people prematurely every year, and across the world that number is 5.5 million.

“Our logic is that the tools are there and we must try to use them,” says Singh. “We feel morally compelled to demonstrate solutions, to say that you can do the right thing without impacting lifestyle. It’s very low risk, proven technology.”